Onemizer was born in 1987 in the South of France.
He spent part of his childhood in Africa where he made his first encounters with art and discovered watercolor. 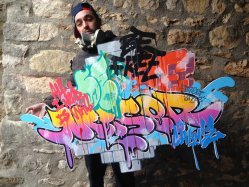 Back in France as a teenager, he became acquainted with Parisian graffiti during his walks around Paris with his parents.
The banks of the motorways as well as the metros parisiens are real museums for him. This real thunderbolt pushed him
to pace later the vacant lots as well as the railways and the disused warehouses in order to paint on walls and to perfect oneself in the shelter of the glances.
After high school, he decided to undertake art studies by integrating a design school, but preferred to pursue his self-taught career.
Little by little, he moves from the wall to the canvas, and it is pushed by his entourage, that he begins to show his work and expose his canvases at the whim of his meetings in luxury hotels, restaurants, bars ...
He then organized his first exhibitions in the Bordeaux area and in the Paris region. The road has been made since its beginnings in the streets, and it now exhibits in numerous international art galleries (Paris, Courchevel, Megève, Cannes, Singapore, Honfleur, London, Bordeaux, Galerie des Arcades aux Mouleaux, Hossegor, Go Gallery in Amsterdam, Street Art Gallery in Dubai, Barbizon ...).
He participated with a hundred others with international artists as well as the world record of the biggest graffiti on canvas which took place in Dubai in November 2014 and which was validated in order to appear in the Guiness book.
He draws his inspiration from the classics of pop art such as Basquiat, Warhol ... as well as simply in his daily life, what surrounds him, and in the street art scene.
He likes to work on lettering, to revisit portraits of personalities or objects that have marked the history or his personal history. Over time, he developed a wide range of different styles, always combining graffiti, tag, "coulures", and especially a multitude of colors.
It uses a wide range of different techniques: paint bombs, stencils, drawings, posca, brushes, ink, and sometimes even directly his hands. He constantly renewed his art, liked to change techniques, change media ...
It is the visual impact and the shock of colors that make each of his paintings more original than the others.

More in this category: « Frédéric Haire Najean by Y Galerie »
back to top

This email address is being protected from spambots. You need JavaScript enabled to view it.